In conversation with Carlos Martorell
By Laura Martínez

If you live in Ibiza or have spent enough time on the island to eat an ensalada payesa (farmer’s salad) at Ca n’Anneta, or to buy a belt at Pedro’s, then you’ll have surely heard someone say: “The 60s were much better,” “Kate Moss was partying at Rock Nights and we had a kiss,” “I was at Freddy Mercury’s 40th birthday party,” and a long list of sayings that veer between the mundane and the unbelievable. One of the people who were actually on the island in the glory days of the 60s, 70s and 80s – and beyond – is Carlos Martorell; a standard-bearer of hippy Ibiza: from riding a horse in the nude to parties where both an average Joe and Mick Jagger could hang out in ease. He lived close to Studio 54 during his years at New York, and it was here where he photographed Grace Jones behind closed doors. She told him “I need something for my head,” and he brought her a hat. I suspect that wasn’t what she needed exactly… Tales like these are all the more reason why we like to hear his stories of yesteryear
When I asked Carlos if he thought that people knew how to have more fun back then, he doesn’t hesitate for one second: “Hell yeah! We had a great time with the simplest of things; my house didn’t have water or electricity for 35 years and there was always someone singing and dancing there. We hung a notebook and a pen on the doors to leave messages, it was the hippy version of WhatsApp because there were no mobile phones”.

Carlos Martorell, who is one of the island’s rst PR’s, organized exclusive parties and said: “They were VIP parties only in terms of the people that came, not in who could come or not because I don’t like separating people. At my parties in Ku, Amnesia and Pacha everybody danced and hung out together, they were such magical times. You could come in as long as you were attractive and up for a dance. It was hard for me to turn people away at the door, but I had to do it because not everyone could get in. We didn’t want to pack the party, because we wanted people to have a good time, be comfortable and dance freely at the same time.”
Music had other stars back then: Frank Zappa, Eric Clapton, Joni Mitchell, Bob Marley… The King of Reggae came to Ibiza thanks to Roger Middleton to hold a concert (in the now-disappeared) Ibiza bullring near the port. “I remember that night perfectly because I borrowed a car from the husband of a close friend of mine, it was a black Range Rover with a gold stripe. Imagine how cool that was in Ibiza at the time! I was very naive and didn’t know anything about what he did for a living, but it turned out that he was a big American drug dealer. I took my friend to the concert, but we had no choice but to listen to it from the car, in front of Bob’s dressing room, because her husband made us promise not to leave the Range Rover unattended.” Carlos had organized a party for Marley at Pacha, but the Jamaican superstar didn’t go because he was so stoned that he went straight to the hotel to sleep it off . But the party went ahead anyway.

Another person who had a love affair with the island was Mike Oldfield, who placed Es Vedrá (Ibiza) on the cover of his album “Voyager” (shame that it turned out to be one of the most boring pieces of music in history, but that’s another matter). The English musician bought a small house on the cliffs in Es Cubells – which he got rid of due to the area’s unstable ground – and later sold it to Noel Gallagher who also ended up selling it for a much better reason: he didn’t want to be James Blunt’s neighbor.
The island has hosted concerts that have made history including one by James Brown, whom Carlos was lucky enough to meet. He said: “I was on the same plane as Brother James as he was coming to the island do a concert in Ku nightclub (now Privilege Ibiza), but the plane was delayed and he was going to arrive late. I knew the club inside out as I had organized the ‘Funeral for the Mediterranean’ – a party to protest against the plastic pollution on Ibiza’s beaches. So I described the club’s layout and gave him a detailed sketch of where he had to go to save time. I also have to mention Freddie Mercury and Montserrat Caballé performing their anthem “Barcelona” for the first time in Ku in May 1987, organized by Pino Sagliocco. It was a spectacular night which we followed up with a party at Pikes. The song went on to be the main anthem of the Barcelona Olympics in 1992.”

In recent years, Ibiza’s popularity has exploded through its association with electronic music, leading it to become renowned throughout the world, both in a good and bad way. Among the latter is the lack of musical variety, because the island needs more live bands and singers performing here. Spain has so many talented musicians that deserve to be performing in Ibiza. At Concept, we are committed to presenting live music through Dorado Live Shows. This concert series brings the best in Spanish and international indie and rock to the island, and its success is a clear indication that the island is crying out for more.
“Ibiza needs to return to its essence in this sense. Since the 90s things have become distorted by business interests, electronic music, designer drugs and the huge size of the venues, all in detriment to the island’s essence. We need more venues like KM5 where you could listen to live music or in El Naif which I opened with Elle McPherson and Mick Jagger. I remember that they wanted to kick us out early that night. It was only 12 a.m. and some jealous so-and-so had called the police because of the noise, but I wasn’t going to stop such a swinging party. I won over the police captain who arrived to shut us down by introducing him to Mick, and he was so thrilled to meet the Rolling Stone in person that he told me: “Keep the party going, Martorell!” 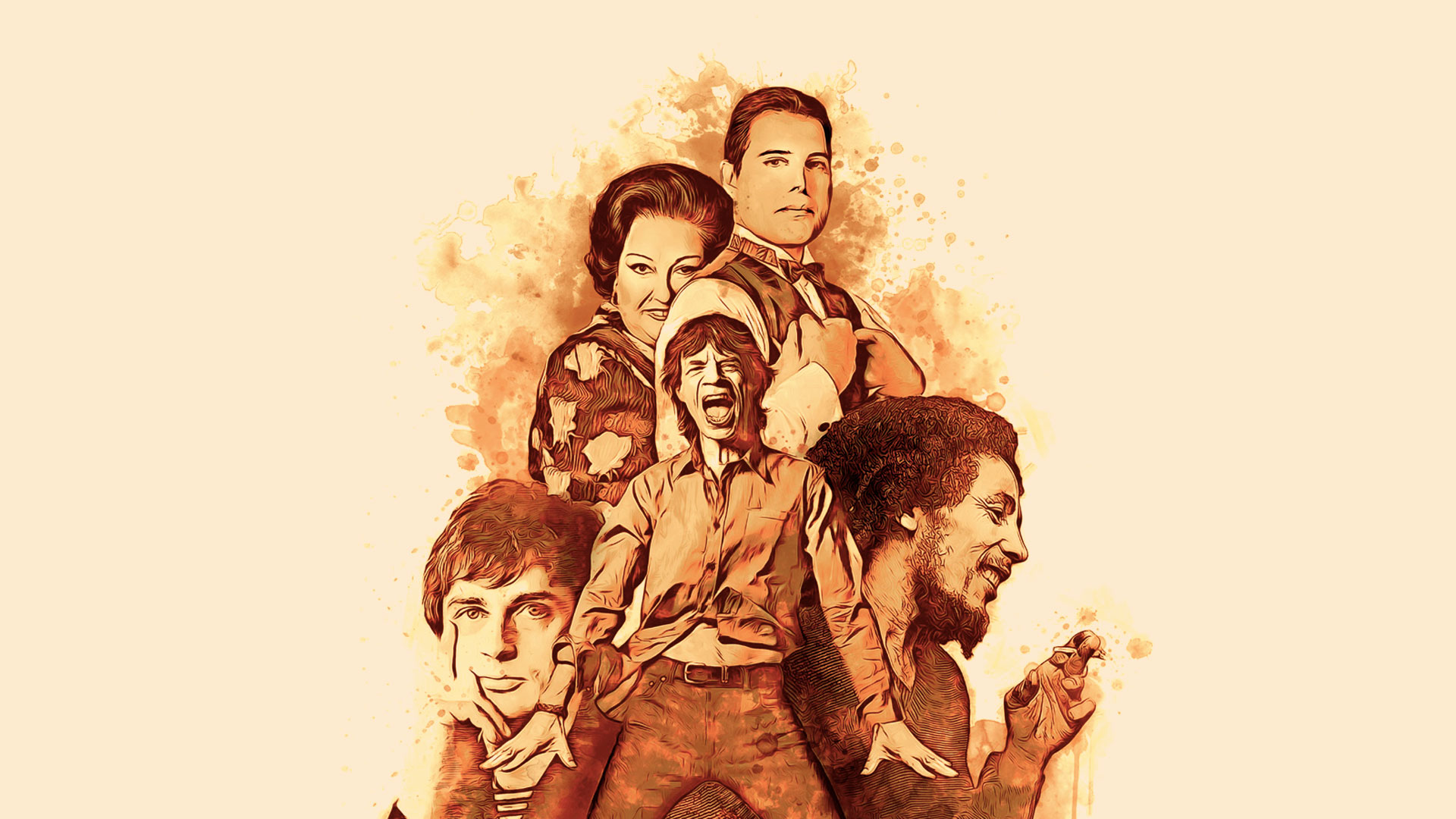 Adda Gallery presents a new exhibition format in which the work of the artists escape the confines of traditional media and expand onto the gallery walls. A new form of installation in which the transitional space becomes the perfect surface for interventions by artists and muralists from around the world.

The mural pieces, which are an essential facet of the gallery’s artists, become part of the Paradiso experience, opening new ways of interaction with the public.

In first such intervention of 2021, we present GREMS (Paris, 1978). Describing his style is especially difficult, since he is characterized by his creativity in fields as diverse as painting, illustration, design and music. Linking the body of work are the common elements that denote his graffiti experience, the use of letters and symbols arranged as if it were a reading, with colors establishing contrast codes.

GREMS uses form, line and color at the service of his intuition to make expressive and direct works, in which abstraction, expressionism and the influence of graffiti are found in a display of energy and luminosity. 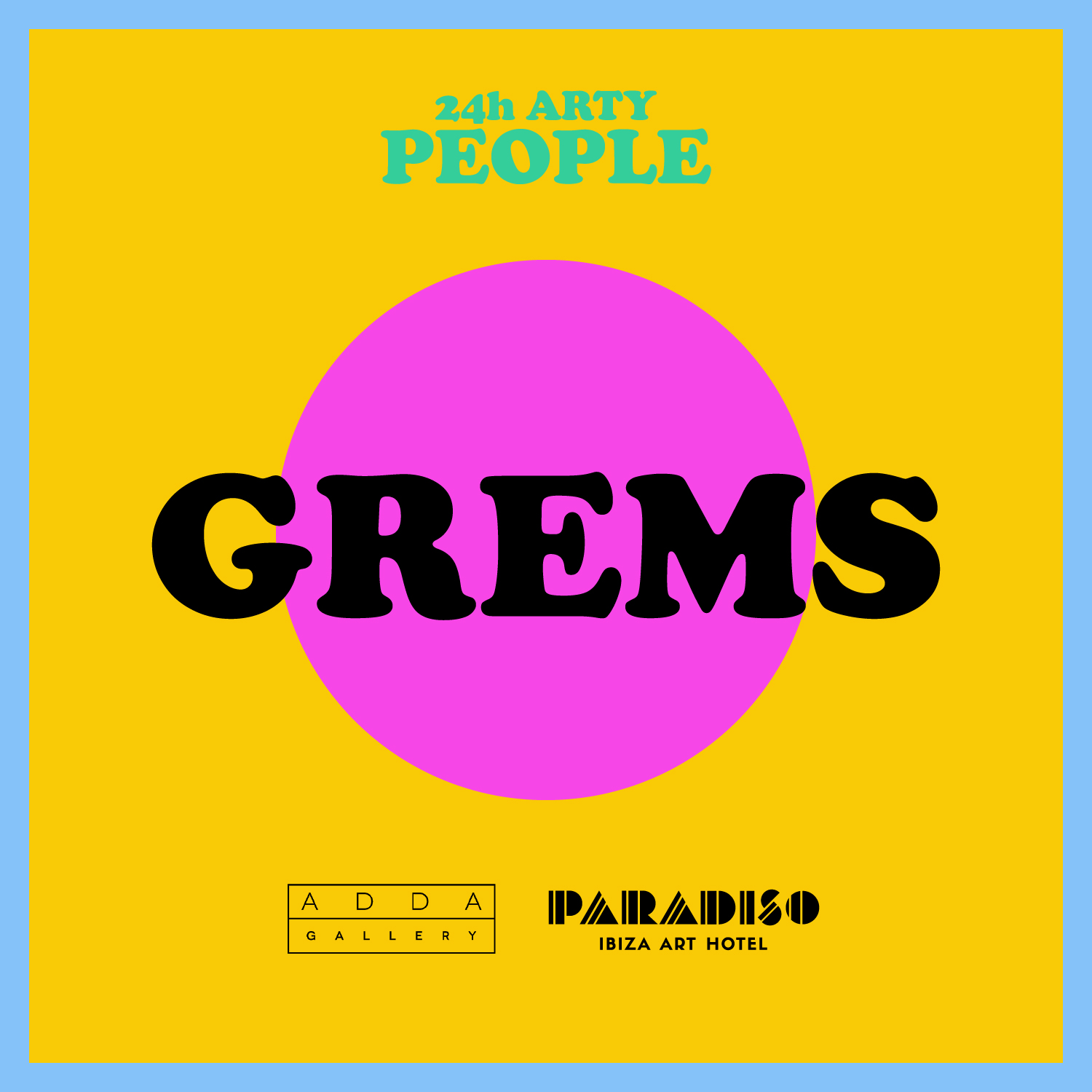 If you’re crazy about hats, then you’re in luck because WHY HATS have arrived in Ibiza, promising to be a match made in heaven. Genis Whylan, who is the brand’s artisan and craftsman, is a rock ‘n’ roll lover who hails from Barcelona and comes with his guitar tucked under his arm. Why Hats are 100% handmade & custom-made, so each piece is one of a kind.

Made from top-quality materials and hand-dyed and sanded, these superb hats reflect the wearer’s personality.
You are free to choose the colour, fabric and adornments that suit you best.

If you still haven’t got yours, then come on down to the Why Hats corner in the Zero Suite at Paradiso Art Hotel on 2nd, 12th, 26th June and the 3rd and 24th July.

They’ll also be on sale at our Rock Nights party, each Friday after our Dorado Live Shows concerts.

Make your summer wild with this most rocker of accessories! 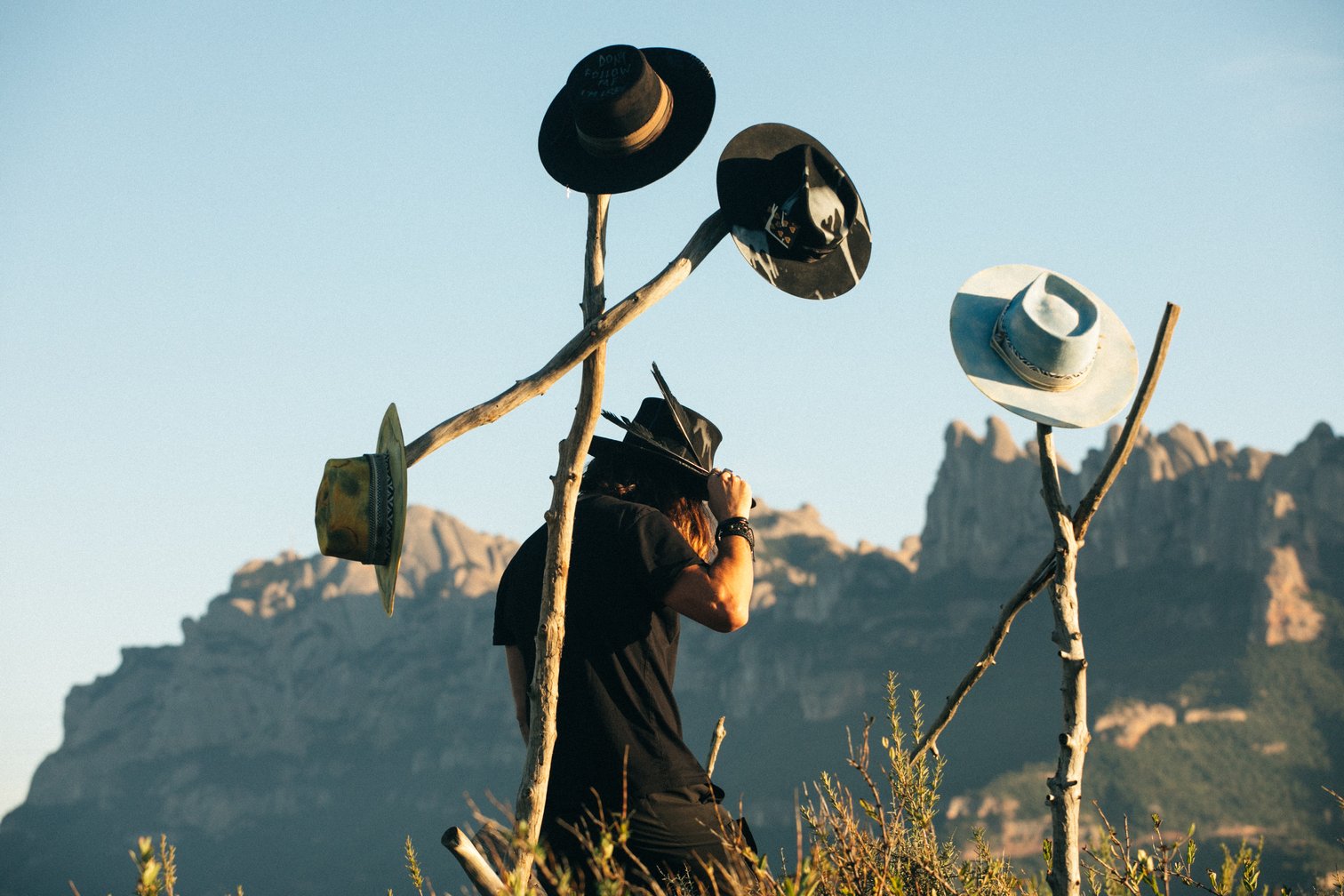 Cannabidiol, better known as CBD, is the natural compound whose therapeutic properties you’ve heard of, over and over again. Used to maintain certain bodily functions such as sleep, appetite and pain relief, there are plenty of reasons why CBD has cultivated followers and created headlines around the world.

It has now reached Paradiso Art Hotel thanks to MARIMBA, a space designed as a Concept Store where you can not only find a wealth of CBD-related products including:

Marimba opens its doors today, putting the cherry on top of our most arty hotel.

We’ll be waiting for you! 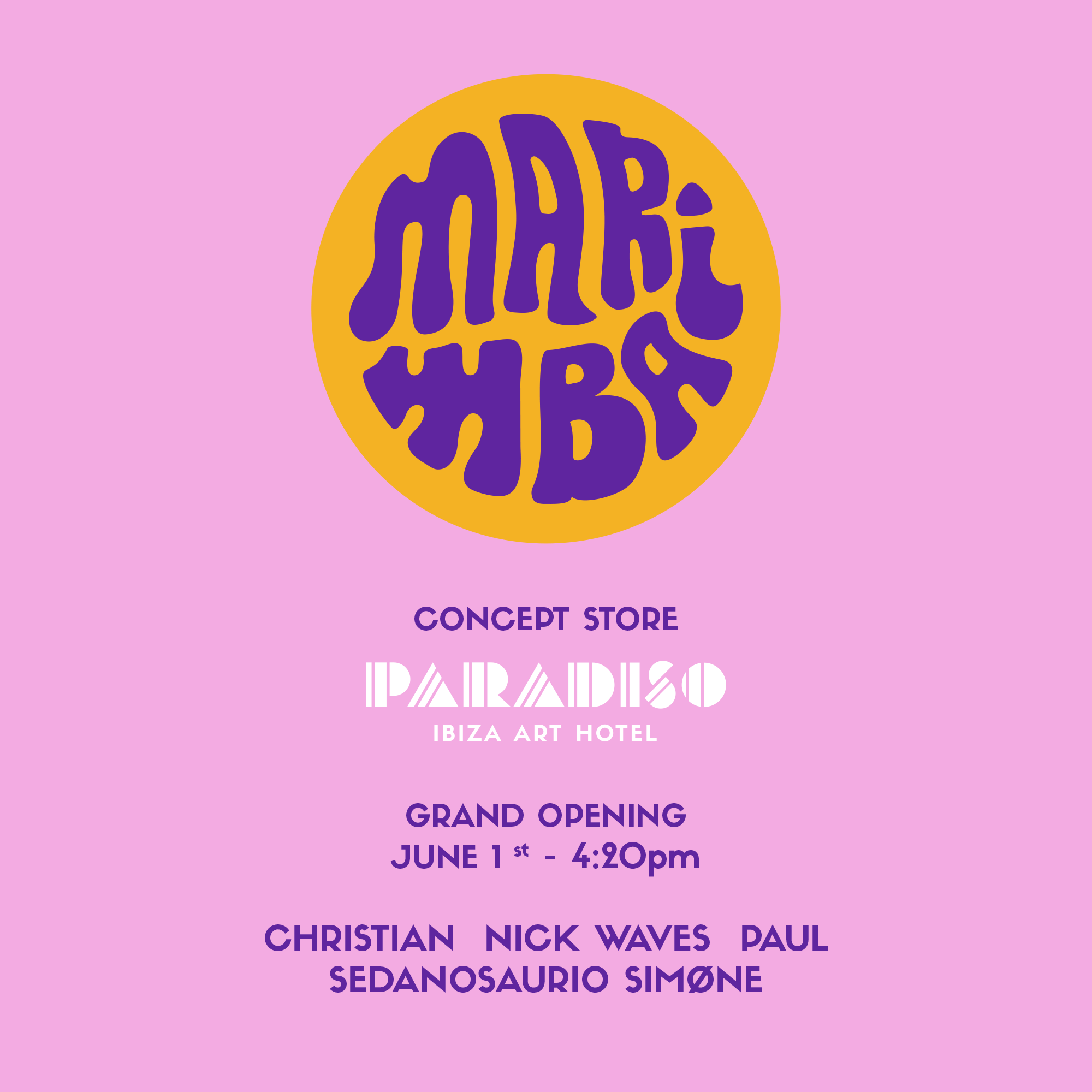